We had a relaxing day off in Cascade Locks filled with visits from friends, beers, ice cream, and petting dogs. We woke early to cross the Columbia River into Washington as the sun crested over the mountains. Walking over the Bridge of the Gods was beautiful, and I experienced a mix of emotions: joy and gratitude to have made it to this place that I had imagined so often; sadness thinking about my relatively short time left on this trail; excitement to see what Washington had to offer. 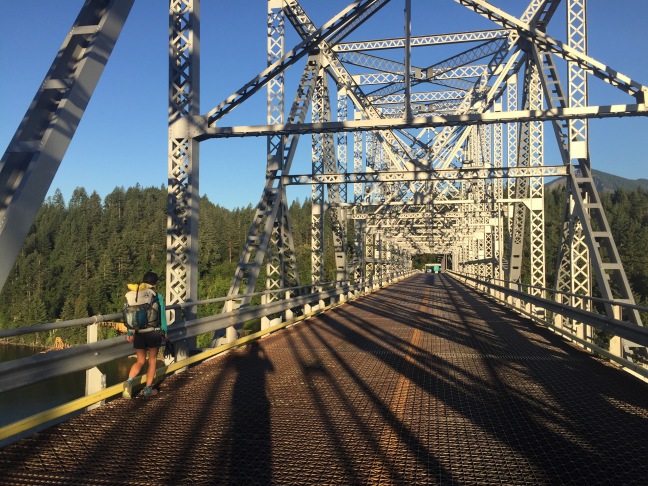 The Bridge of the Gods represents the low point on the trail at less than 200 ft of elevation, so we had a fairly decent climb out of there. The blackberries dotting the trail gave a welcome excuse to stop from time to time, though. We decided to get an early night and stopped after 20 miles. We ate, washed, and were in bed before 6 pm – my inner old lady was thrilled. The next day had a couple of big climbs, and I was feeling totally drained by lunch. Happily, our buddies Double D and the Kraken at lunch at Panther Creek just as we were leaving for the afternoon. We told them to catch up and headed out for the 3000 ft climb awaiting us.

Partway up the hill, I began to feel really unwell. I was starting to get belly pain and nausea. It felt similar to how I felt the year before when a Salmonella infection led to a hospital stay and the end of our trails. I spent an hour or more denying it before I told Everett. He was, of course, worried and had me take some medication we were carrying. He offered to take my pack but I stubbornly refused. We were now at the top of the hill but still had over 10 miles to the nearest road crossing, and it was only a forest service road. We made that our goal and tried to hurry down the hill before I got worse. We made it about 5 miles before the pain had me doubled over and vomiting, unable to even keep down water. Everett finally convinced me to take some of the pain medication he had from his kidney stones and I agreed to let him carry my pack. He heroically carried both our backpacks the remaining 5 miles to the road while I staggered along behind him. It was a miserable 5 miles, but we finally arrived at the road. Amazingly, some of the hikers who had passed by us (and offered help, medicine, and words of encouragement) had told a trail angel about us and he had stayed to see if we needed any help. People are amazing, aren’t they?(Even more amazing was that our friends, Tim and Sharon, were willing to drive over 3 hours to come rescue us off the trail before we knew this trail angel was there!) In no time, we were on our way to Portland where I would have a chance to rest and recover (and everett could eat doughnuts to his heart’s content). 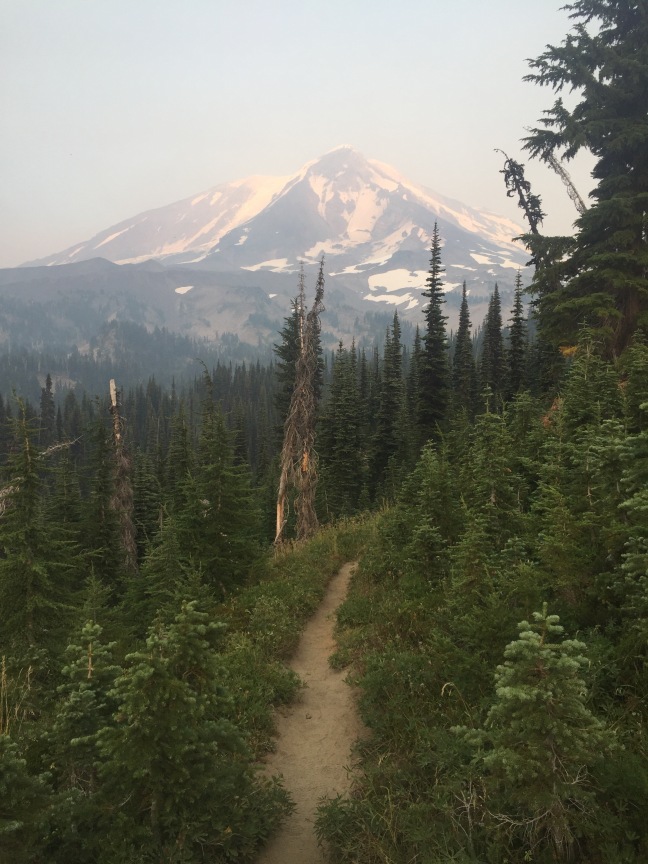 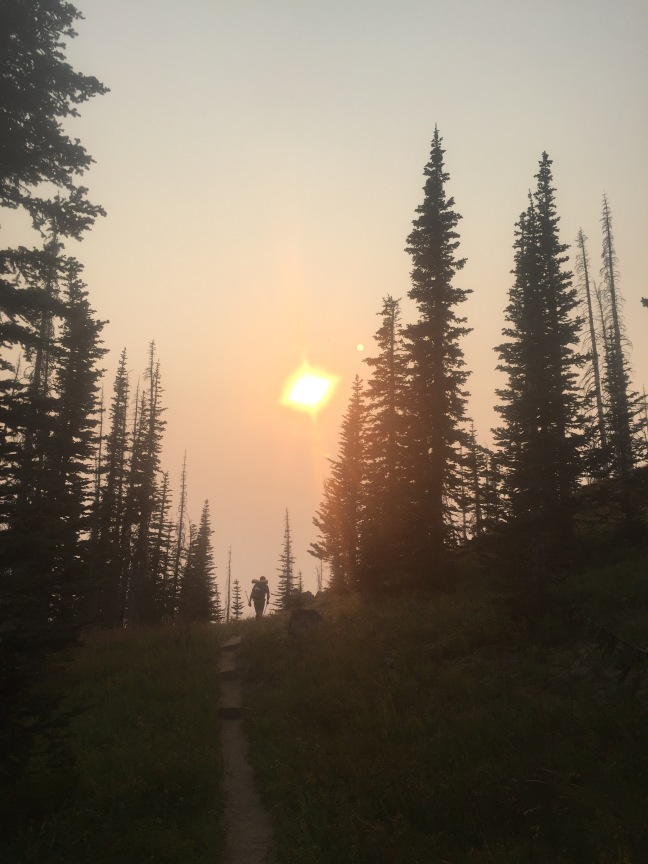 After a day and a half off, we managed to get back to the trail near Trout Lake. It cost us about 30 miles of missed trail but it was an easier access point than where we had departed. To our surprise, we bumped into Martyn again and hiked together for a couple of miles before he pulled off to camp for the night. We managed another few miles before setting up camp. The light was eerie with the evening sun obscured by the thick smoke from nearby fires. We were barely able to see the peak of Mt Adams in spite of standing right on its shoulder.

The night was cool and calm, and when we woke we were amazed to find that the smoke had cleared, leaving incredible views of Mt Adams, Mt St Helens and Mt Rainier as we walked. We had an incredibly pleasant day of hiking, managing over 30 miles to camp at lovely Sheep Lake that evening. We double-dinnered and were asleep in no time. 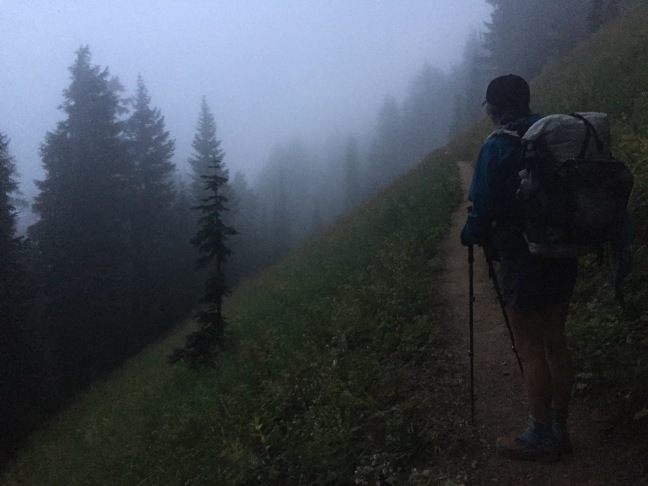 We woke early as we had planned to make the final 25 miles down to White Pass that day. We had a couple packages that needed to be picked up at the store before closing (including new shoes – yay!) and we wanted to figure out if the next fire closure was still in effect. Yes, another one. The last time we had checked, 52 miles of trail were closed around Mt Rainier due to fire and there was no proposed alternate. More on that later.

It was foggy and cool as we set off. It was my favourite kind of day watching the mist swirl around the mountains, revealing and obscuring the views in turn. We would hike into the grey with no idea of our surroundings; then, all of the sudden, the fog would lift and reveal a spectacular steep volcanic mountain landscape. It looked so remarkably like the mountains of BC that it hurt my heart. It was absolutely stunning. We enjoyed watching the sun illuminate the mountain tops as we crested Cispus Pass and then descended back into the clouds. The next time the fog cleared, we were in a spectacular mountain valley with waterfalls and mountain goats grazing on the hillside. From there, we headed up again to get to a section of trail I have been so looking forward to: Knife’s Edge.

Initially, it was foggy during our approach and we were unable to see where we were headed. But suddenly the clouds parted and we could see the trail winding along a ridgeline all the way into the distance. Steep drop offs on either side made for an awesome feeling of exposure and beautiful 360 views. It was truly the most wonderful place on trail so far. I’m not sure the photos even do it justice, but they’ll have to do because I have no words.

We made it down to White Pass last night and were able to get a motel room in spite of the crazy HUGE flea market on the go here this weekend (the town grows from 300 to 30,000 for this one event). The fire closure is still in effect and the highway adjacent is intermittently open. We have spent the day trying to sort out our way around the closure and we’re all getting restless. Now acclimatized to hiking 30 miles daily, it’s hard for us to slow down. How will we manage when we finally reach the border? 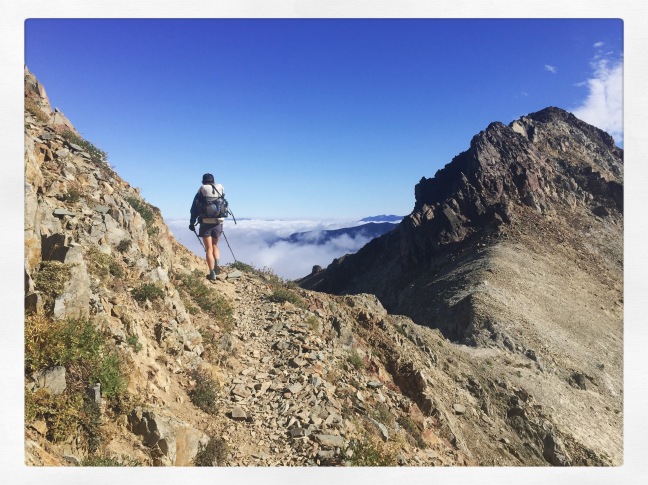 4 thoughts on “Bridge of the Gods and the final state”