After a couple of days off in Ashland we made the flip back to Chester, driving a distance that had taken us 3 weeks to hike in about 6 hours. Arriving at the trail around 10 pm, we hastily set up camp in the dark. The next morning we set out southbound along the PCT. It was strange and disorienting to travel south after traveling north for over 1000 miles. 8 miles in, we arrived at the official halfway marker of the PCT. It was anticlimactic as we still had around 150 miles to go before we had actually completed half of the trail. We moved on quickly as we hoped to reach Belden in 1.5 days time. The section was hot, dusty, and no match for the scenery of the Marble Mountains and Trinity Alps we had just left. Additionally, Everett had gotten a new pair of shoes (same type and size, though) that absolutely destroyed his feet. By the time we descended into Belden the next day, one of his heels was completely raw. In low spirits, we crossed over the bridge to cheers from the partygoers in the river below. (For those of you unfamiliar with Belden, it is home to about 7 year-round residents, but host to parties and festivals essentially every weekend of the summer.) Cold drinks, ice cream, and a swim in the Feather River improved our mood moderately, but we were both nervous about how Everett’s blisters would evolve the next day. 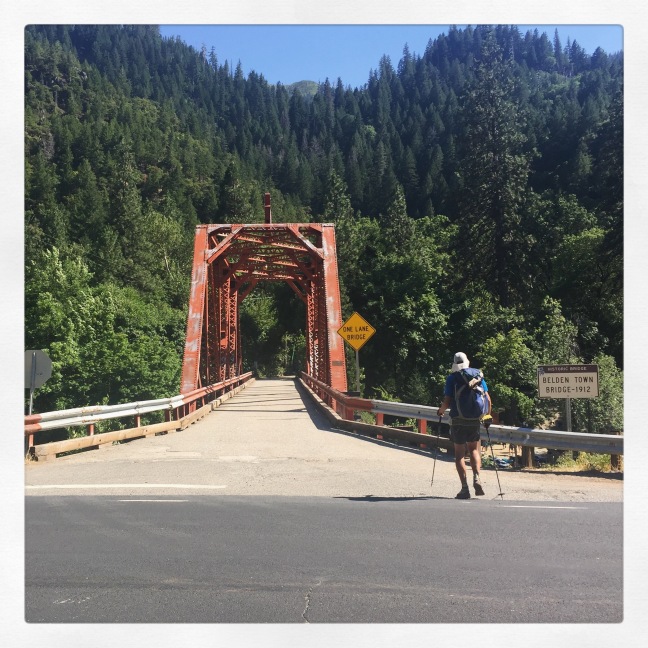 The next day we faced a steep uphill climb to get back to the crest. We struggled to treat the now-exposed ulcer on Everett’s heel with every trick we knew. Finally, a combination of moleskin, polysporin and duct tape allowed him to get through a 19 mile day to Bucks Lake Road. Our hiking buddy, Red (Martyn), had left us a note saying he would be waiting at the national forest campground about a mile down the road. Interestingly, for those fans of Wild out there, it was the campground that Cheryl Strayed was evicted from during her hike in 1998. 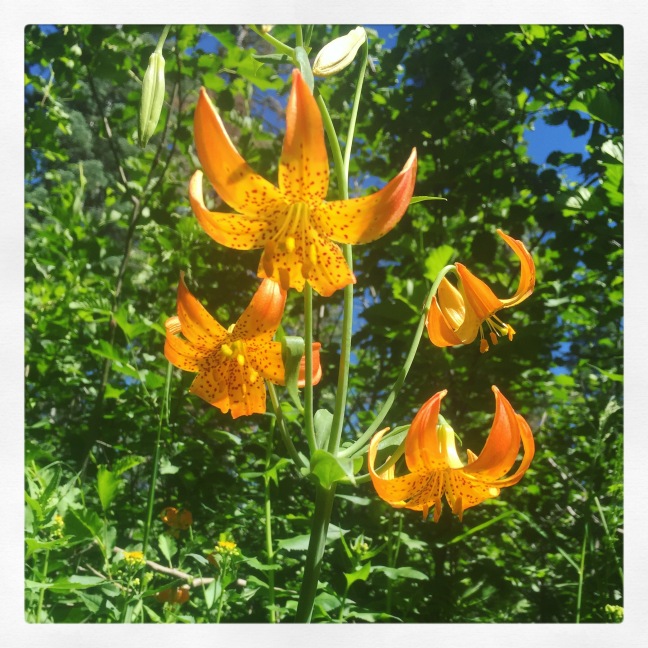 On our walk towards the campground, a beautiful couple (Jon and Kitty) and their dog (Donner) stopped to give us a ride to the campground. They were excited to hear that we were southbounding as they have a place near Donner Pass and offered to trail angel for us when we passed through! As if that wasn’t enough of a treat, when we arrived at the campground a PCTA trail crew offered us cold drinks and had already paid for our tent site. They also went out of their way to drive us a couple miles down the road to a restaurant near Bucks Lake so we could enjoy burgers and beer! The generosity and kindness of people has been overwhelming!

After a short day and a restful evening, we had hoped that Everett’s foot would have healed enough to be able to continue. But, it was not to be as a deeper blister had formed under the ulcer on his heel. We decided to head down to the town of Quincy to take some time to heal and replenish our first aid kit. Unfortunately, that meant parting with our hiking partners, Red and Chewie, who we had been hiking with for over 1000 miles and 400 miles, respectively. It was hard to watch them hike away, but it would’ve been utterly unfair to ask them to stay with us, not knowing how long we would need to rest. 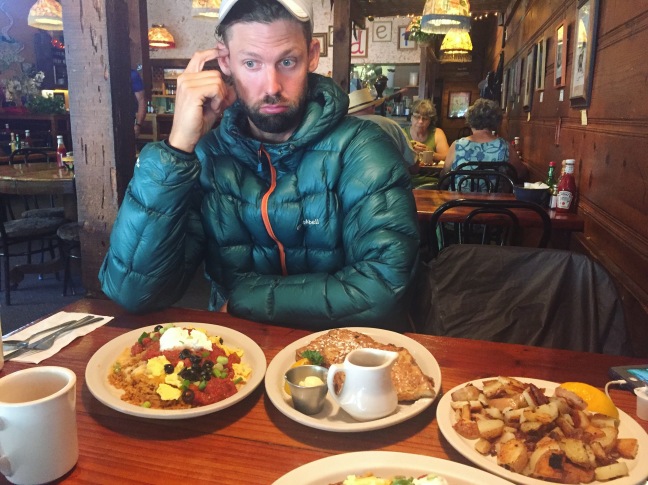 We ended up spending 3 days off in Quincy, and while we enjoyed the rest and relaxation in that beautiful town, we were glad to get back to the trail. As we headed back towards the Sierra, two amazing things began to happen: the scenery became increasingly spectacular and we started seeing friends who we hadn’t seen in weeks or months as we crossed paths! The beauty (and the difficulty) of hiking in the opposite direction of the herd is that you see way more people than you otherwise would! This allowed us to chat with trail friends we may never have seen again had we been headed in the same direction. At the same time, our progress slowed significantly as we spent more and more time catching up with people and less time hiking. 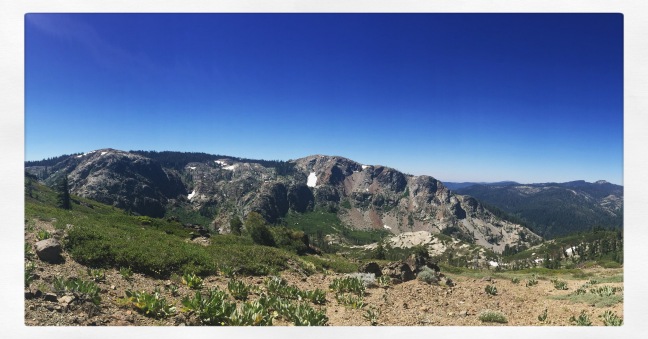 A couple days out of Sierra City, we also met the first fellow SoBos we have seen since our flip back to Chester. We had a couple fun days hiking and camping alongside Spider Mama, Tetris, Hitch and Unicorn through the Sierra Buttes and into Sierra City. The night before heading into town, we came across an amazing trail angel, Old School, who had hiked the trail in 2016. She was set up on the trail with her VW van (which we have since dubbed the White Whale) with amazing trail magic, including fresh fruit, chips and salsa, and chocolate pudding! I never knew I was missing chocolate pudding, but it was heaven! We spent the night there hanging out with several other hikers and having a generally wonderful time before heading out early the next morning to get into Sierra City for breakfast. We were happy to do the 10 mile descent before the heat of the day as it was mostly exposed. We celebrated our arrival in town at the Red Moose Cafe with double breakfast. They may have had the best veggie scramble and hashbrowns on the entire trail! 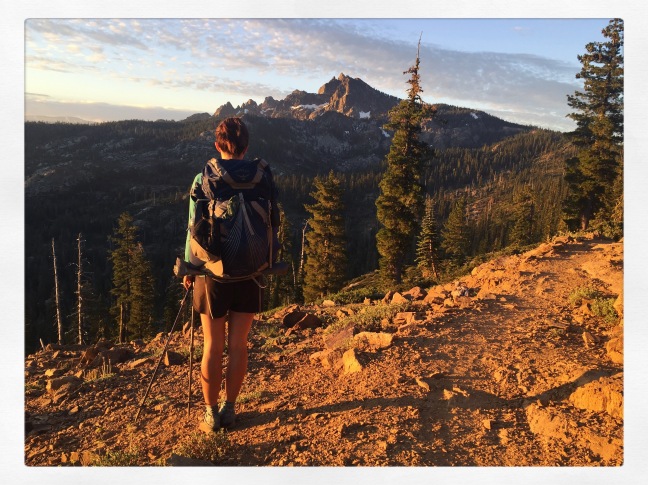 We spent the heat of the day hanging out in the shade in town before setting out late in the afternoon. We planned to camp about 5 miles out of town so we could do the main part of the climb early the next morning. As we arrived at our intended campsite, we saw some of our friends who we had lost touch with after we initially flipped back in June! We had an awesome time catching up with them that night before going our separate ways again the next morning. We set off again into the mountains looking forward to a couple days of hiking before we would reach Donner Pass. 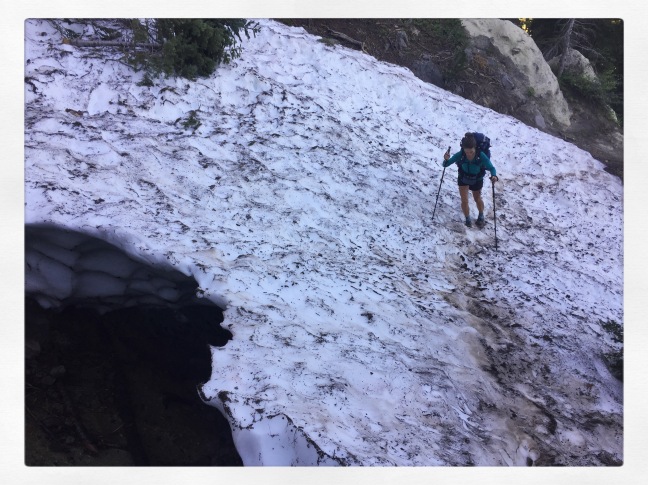 3 thoughts on “SoBo life and random acts of kindness”