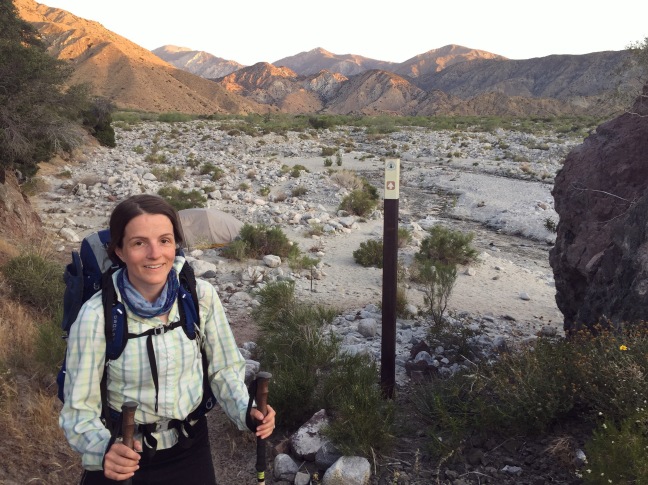 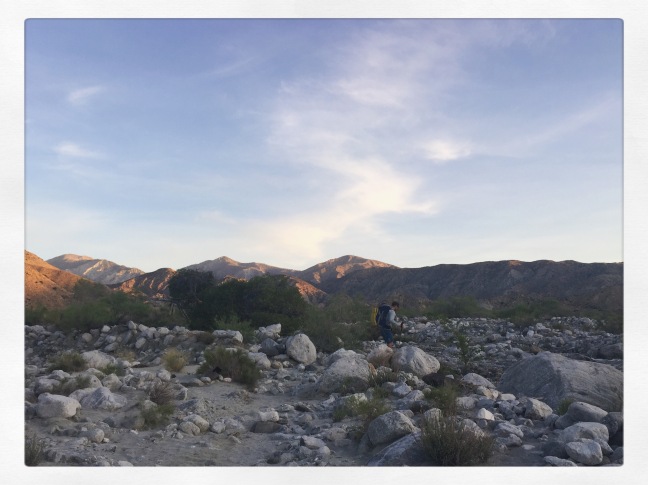 After leaving the beautiful Whitewater Preserve, we began a very hot walk alongside Mission Creek to head back into the mountains. We felt lucky for the high snow/rain year as we crossed the creek several times that day, taking time to soak our feet and replenish our water (we were drinking up to 1 L every 2 miles!). We came across a man named Rick during one of our creek stops, who was keen to see our reaction to his news of snow in the forecast. I think it’s safe to say we disappointed him with our glee at that prospect. 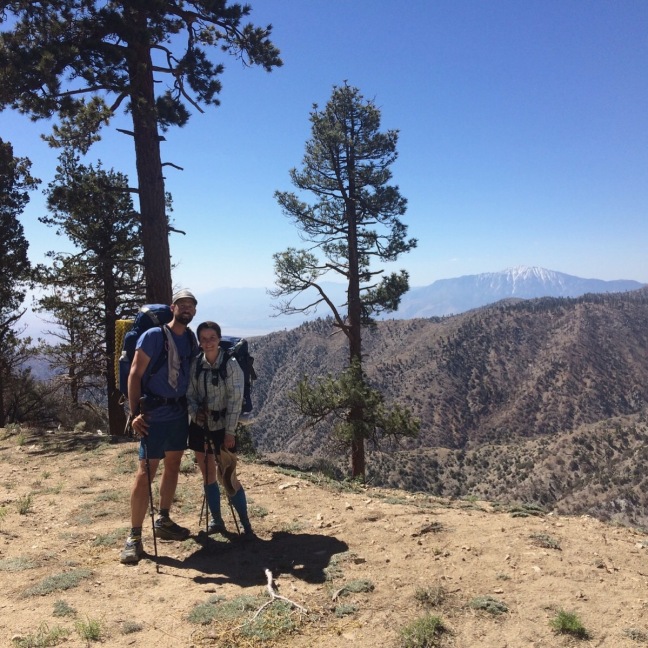 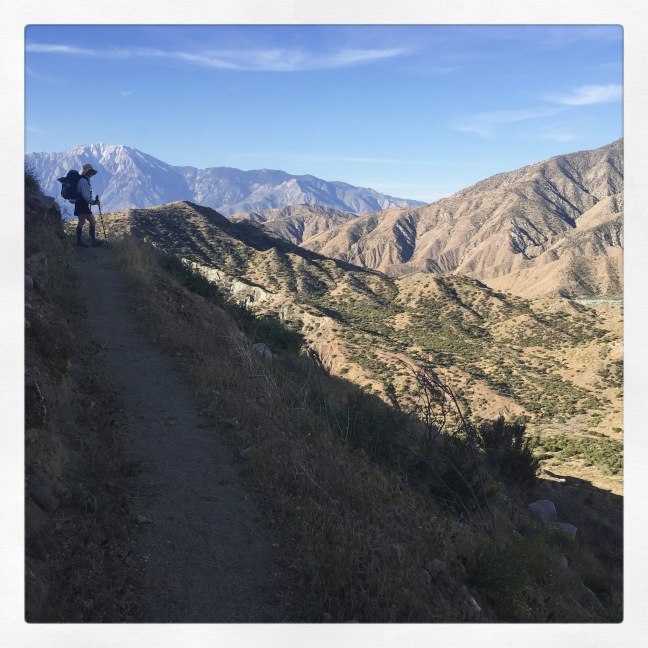 We continued our push into the mountains, with San Jacinto ever looming in the background. It is one of the best and worst features of this trail (depending on your mood and fatigue level) that you can often see where you are going and where you have been for MILES. We enjoyed the cooler temperatures and forest shade as we climbed. As we reached the peak of our climb at Onyx Summit, we encountered a lovely surprise: a couch! It was such a wonderful treat to sit on a couch for a spell. 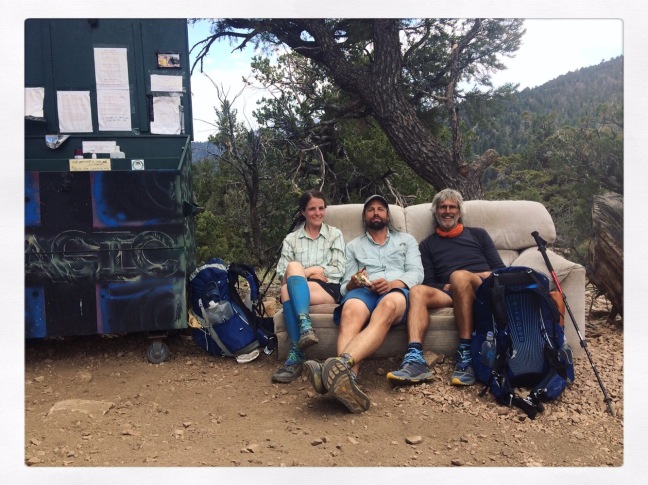 The next day, we finished the last few miles into Big Bear Lake. We headed straight for the McDonalds before tackling our resupply. The details of the town stay are altogether boring (and repetitive), but mostly involved eating, shopping, eating, laundry, eating, showering, and eating. Getting skinnier (and colder!) by the day, we searched out the biggest breakfast we could find. The Grizzly Manor Cafe answered the call spectacularly. 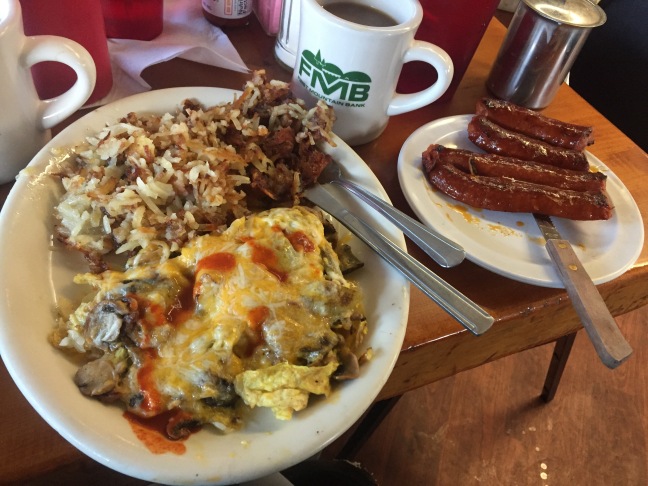 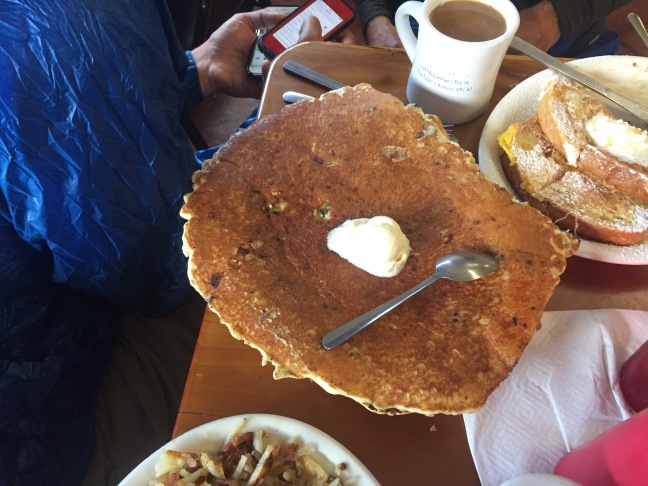 Saturday afternoon we set off back to the trail under blue skies, but with the promise of a snowstorm looming. We were looking forward to this next leg of our journey not only for the snow, but also for the promise of the only on-trail McDonalds at Cajon Pass. We hiked 9 miles to a cozy camp spot and dove into our sleeping bags just as the snow began. We slept warmly and woke to a light dusting of snow blanketing our forest surroundings. 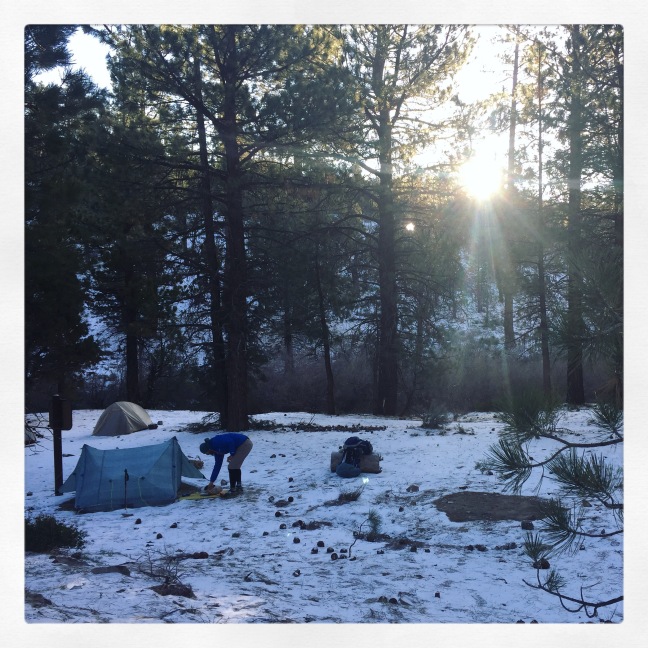 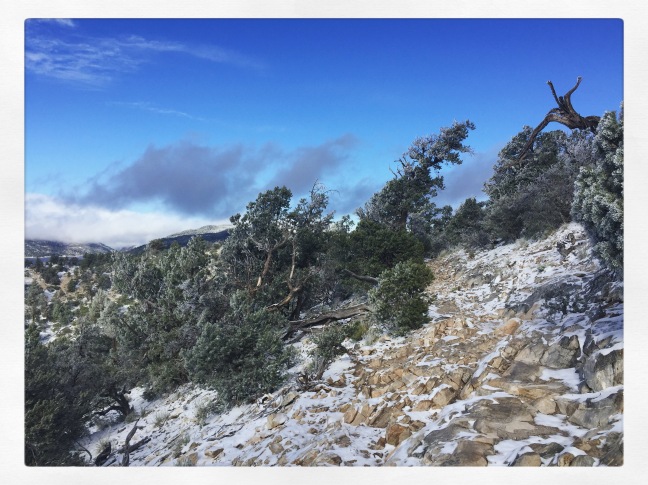 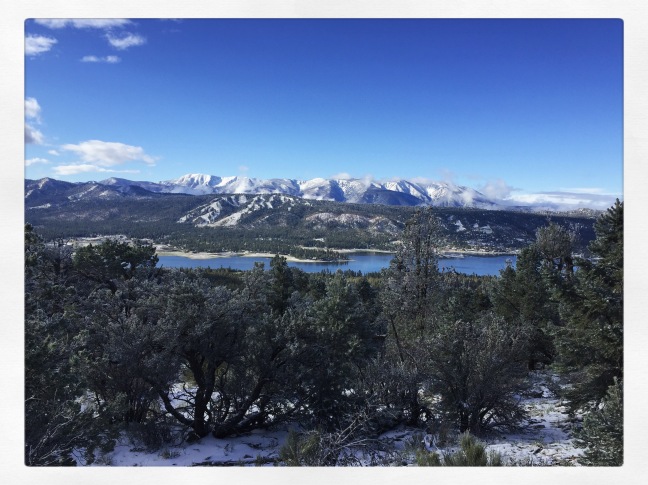 We enjoyed a day of hiking in the cool temperatures with it snowing on and off for most of the day before setting into a beautiful tent site near Holcomb Creek. As Everett started a campfire, the clouds began to part and treated us to a beautiful evening. As we took out our stoves to prepare a meal of macaroni and cheese, we discovered that we were out of fuel, having forgotten to buy a new canister in Big Bear. Not keen on the idea of cold macaroni, we managed to heat some water by the fire instead. With at least 70 miles between us and our next chance to buy fuel, I began mentally scanning our food and calculating just how quickly we could make it to McDonalds for our next hot meal. 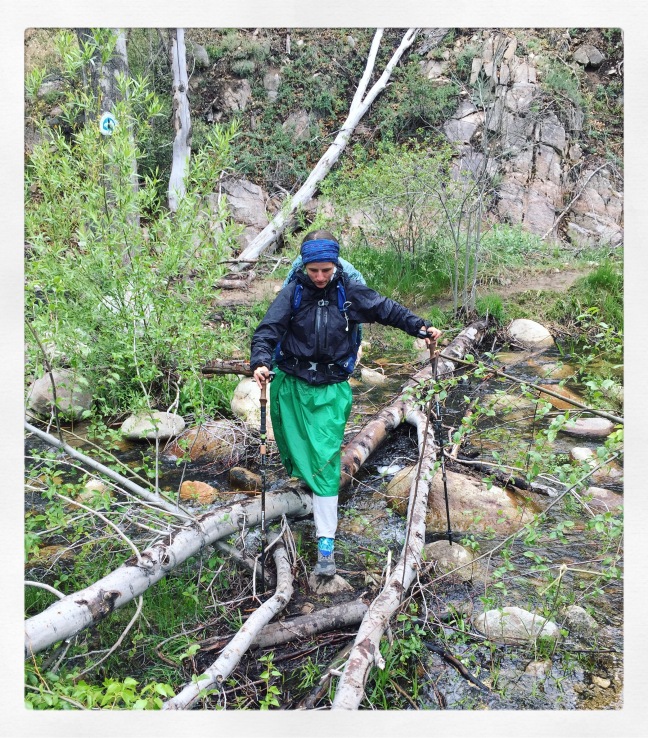 We had another cold one that night, with temperatures dipping into the negatives. Luckily our gear has kept us warm and mostly dry (aside from some condensation issues we’re still workshopping – any Zpacks tent owners please chime in re: condensation in colder climates!). It has been a good pre-Sierra test of the tent and sleeping set up.  That day we looked forward to a beautiful hike through the Deep Creek area. It is a stunning rocky canyon cut into the desert hills with a clear, cold creek running through for miles. Unfortunately, any place as wonderful as that quickly becomes accessible by road and ruined shortly thereafter (Warning: rant ahead).  The amount of graffiti and human garbage (both literal and figurative, if I can be harsh for a moment) was disgusting, especially at the hot springs. This is why we can’t have nice things. It really led me to reflect on all the reading I’ve done and lecturing I’ve had on leave-no-trace principles in the backcountry. We pack out every snippet of garbage we bring (yes, including used TP – it does NOT biodegrade well in a desert environment) and take care not to contaminate water sources with our own waste or soap products. I can say with confidence that the only things I have left in the backcountry are my footprints. So, to have walked 300 miles only to see graffiti at every turn, abandoned footballs and pool noodles floating down the creek, and heaps of garbage piled under trees at the hot spring was upsetting, to say the least. But enough on that for now. 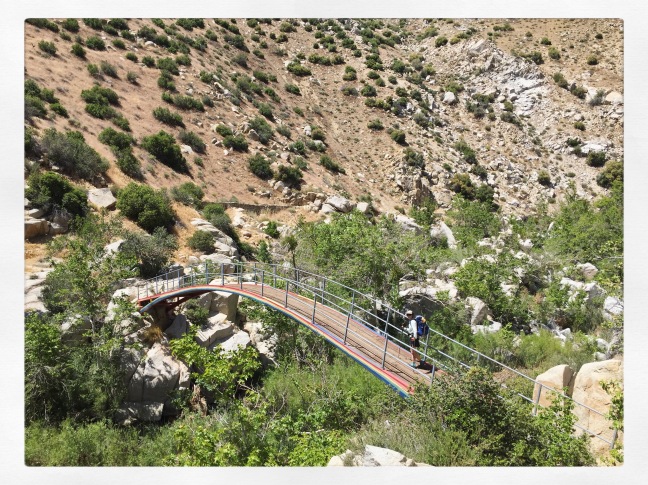 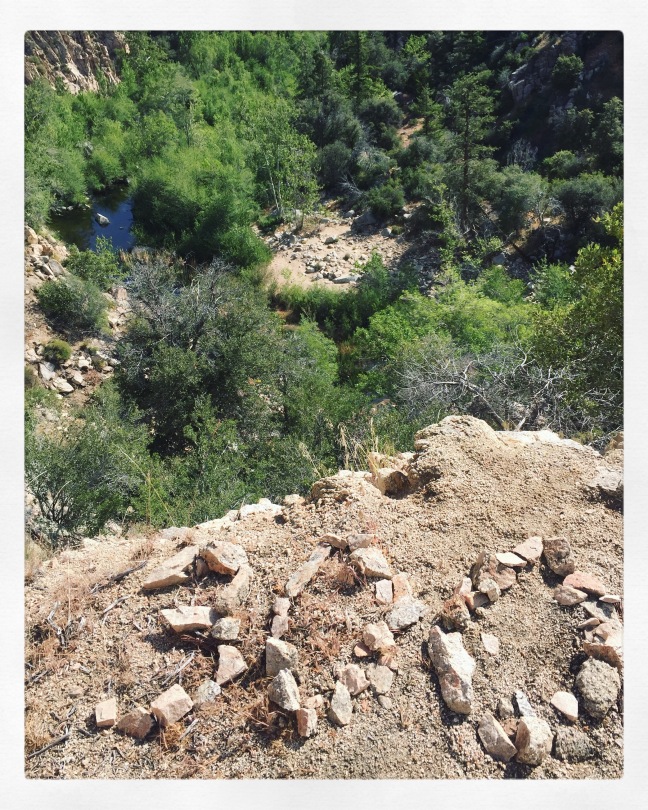 As I mentioned briefly, Everett and I have now passed the 300 mile marker (and are actually approaching 400 in the next couple of days!). We ended our deep creek day camped in a burn area only 24 miles from the McDonalds. In the absence of fuel for our stove we enjoyed a supper of Lucky Charms cereal complete with rehydrated milk served in a ziplock bag. It was perfect. The next day we left early in our push to arrive at the McDonalds that afternoon. To be honest, much of that day is a blur for me. I took a break from fantasizing about hash browns to plan my assault on the McDonald’s menu. However, the final four miles served up a beautiful and extremely windy descent into Cajon Pass (a major destination for PCT hikers, but in reality, a fairly unremarkable intersection of freeways and rail lines). 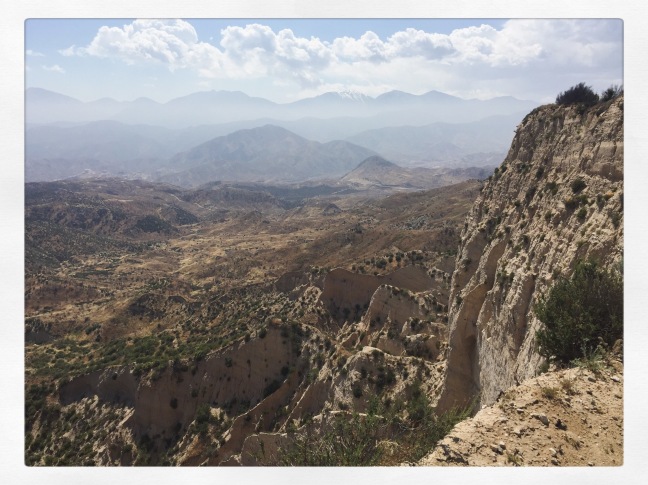 It was around 3 pm when we saw the Golden Arches. Everett made quick work of 5 McDoubles, fries, root beer and a Mcflurry, while I settled for two double quarter-pounders with cheese (lettuce-wrapped, of course), a large fries, coke and a hot fudge sundae with peanuts. It was hiker-trash heaven. My only regret was I didn’t eat more ice cream. 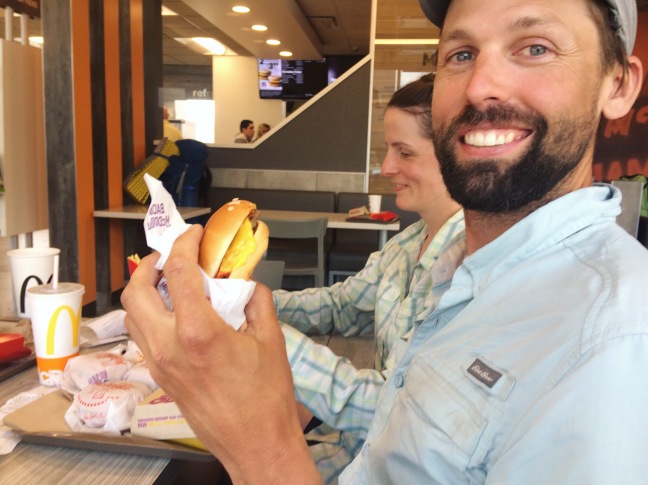 Heavy and exhausted after the hike and the meal, we rolled ourselves over to the nearby Best Western hotel for the night. The weather was rolling in, and shortly after our arrival it began to rain. Although the notion of a hotel stay just two days short of Wrightwood was judged by many of our fellow hikers initially, we watched as the majority of them followed suit. Sometimes the promise of a hot shower, laundry and a warm bed is too good to pass up. 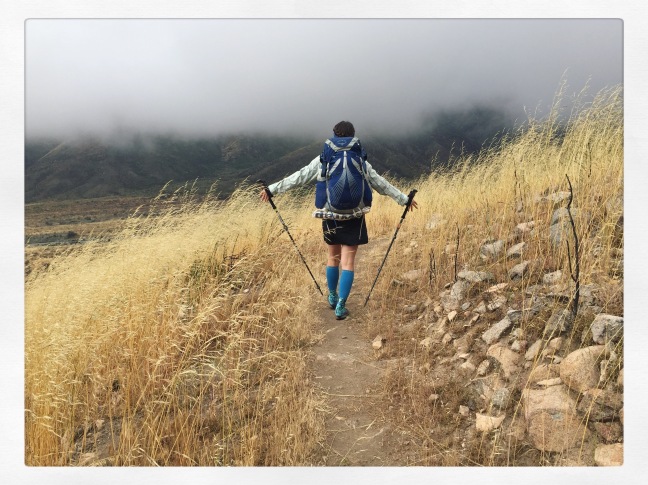 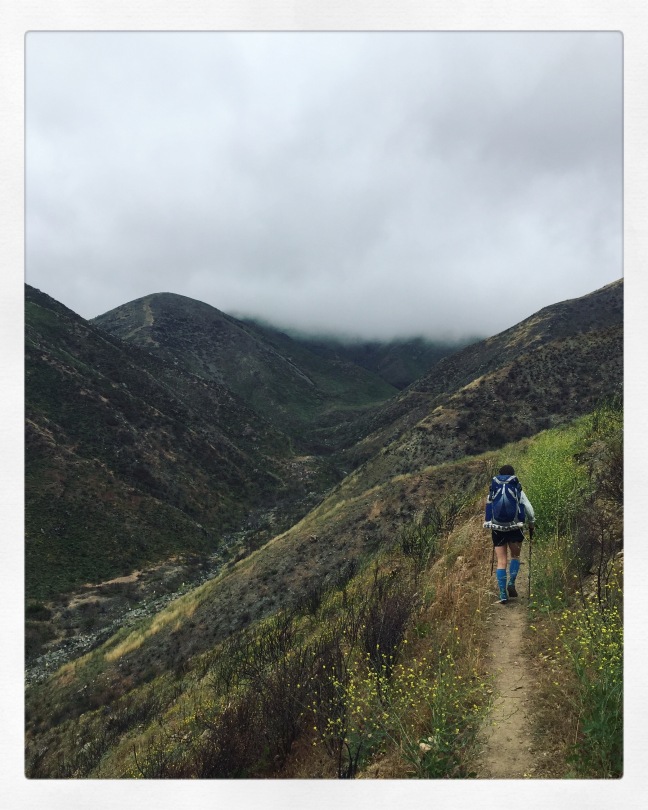 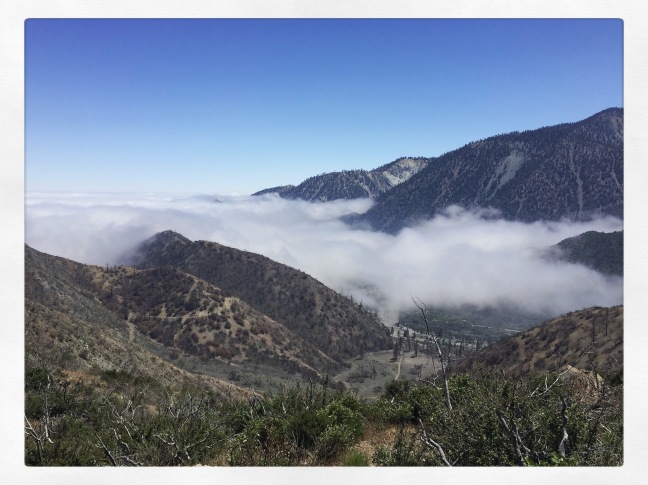 The next day (after complimentary hotel breakfast AND McDonald’s second breakfast) we were treated to a cool, foggy morning as we started our ascent back into the mountains. We have been so lucky for the moderate temperatures on this leg of our journey! It was a beautiful but steady climb that day for an ascent of over 5000 ft over 22 miles. Around noon we broke through the clouds and were treated to spectacular views of the mountains ahead. Unfortunately, an arson fire had razed much of the hillside last fall. As we climbed we met some volunteers who were working on restoring and rebuilding the trail through this burn area. It is only thanks to the tireless work of volunteers like these that such a beautiful trail exists for us. (Check out one of the volunteers’ instagram account at: mountainsoles). Eventually climbing out of the burn area, we enjoyed a pine forest for the rest of our day before camping a mere 5 miles from town. The next morning a quick scamper down the hill put us at highway 2, where we were promptly picked up by a forest service worker named SpiritWolf. He took us into the town of Wrightwood while giving me a lesson on the medicinal plants of the area and their uses. After dropping us off, we made a beeline for the nearest breakfast place to try to fill the black hole that once was my stomach. We are looking forward to a couple days of R&R here before heading out on the trail again! Next stop, Agua Dulce! 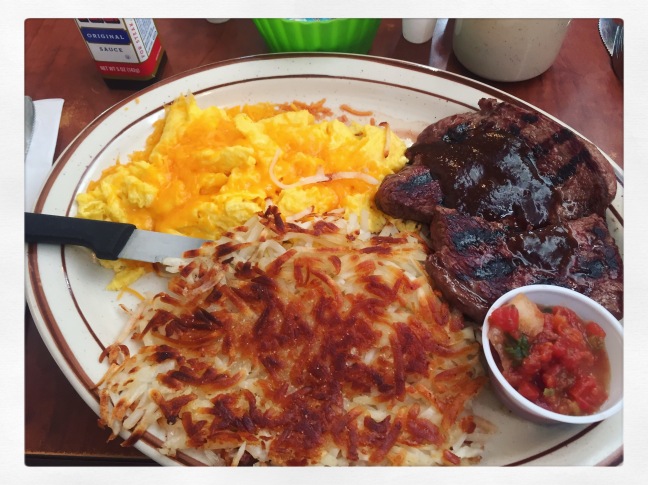 2 thoughts on “Stove troubles, gulling McDoubles, and the shaking of the snow globe”