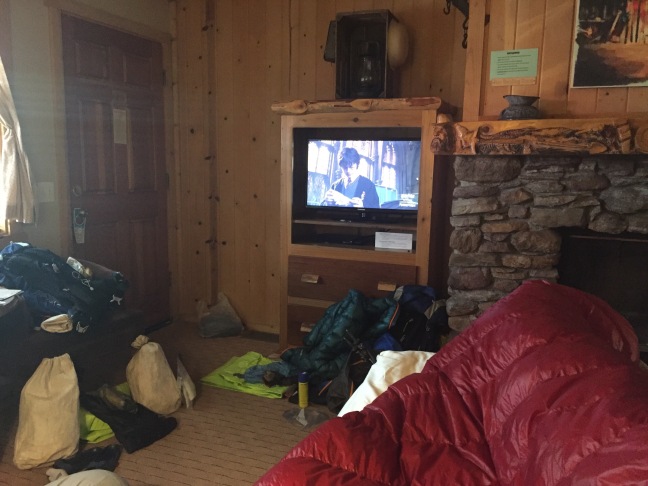 Some banal and wholly uninteresting ways of thinking began (*likely continued) for me when we first entertained and then committed to hike the PCT (our buddy, Roel, pronounces this PEE-see-tee, with the emphasis in a weird Dutch place God love him).  There were unknowns that needed to be prepared for, ie; gear suitability, food consumption necessary per work output, how much weight I needed to gain, weather conditions to suffer (see Blousers), which cookies keep best at desert temperature without turning to crumbs by the constant drudgery etc..  Essentially I spent altogether too much energy developing spreadsheets and overthinking questions that really can only be answered by experience.

Hiking / skiing / snowmobiling out of reach in Canada’s backcountry makes one consider those questions with an eye on gravity.  “If a snowstorm blows up, will I survive?” and “If I blow up something on the sled, can I fix it well enough – or worse abandon it and still make it home alive?”  Canada tends towards blowing things up and seeing if you live through it.  Not so much on the PCT.

Truthfully, the weather here is so stable, the services so available, the trail so established, and the trail information so easy to access that it isn’t nearly so necessary to plan for the worst (to a degree – some sections actually are sort of gnarly).  You wake up, hike, then go to sleep.  Unless you break your foot on the second day … which you can’t really prepare for anyway.  Nothing blows up here.  Except carbon fiber / titanium tent pegs in 160km/h winds.  I find this a difficult ringtone to answer.

A very nice man named Rolling Thunder – who is also quite a wonderful Journalist / Photographer, and prior thru-hiker we met at Scout and Frodo’s in San Diego shared a similar sentiment.  His years climbing under the highly unpredictable weather of New Zealand’s alpine made the ultra-light ethos common to PCT’ers seem a foreign language.  It took him years to loosen his grip on extra worst case gear.  His trail journals are highly entertaining, and his “Humans of the PCT 17” are true to form (though if you spot an entry with Kathryn and I, read it as if we are both smiling otherwise I seem somehow more of a jerk than normal), and they are well worth a look.

There are two points I think worth establishing here.  The first is that the mode of thinking I adopted prior to our first try last year – was too baked in uncertainty and an overpreparing mentality served by more consumption than is necessary.  And I mean, holy crap you should see our basement.  The second, is that there are many unnecessary, uh, ‘necessities’ that will weigh you down.

It is a mistake to get too tied up in gear.  You will make do with what you have.  It’s usually better to get rid of things in your pack than buy something lighter – (with some obvious caveats that must be learned rather than explained).

And there are plenty of people out there who will try to sell you on all kinds of stuff and believe in their superiorty for making ‘better choices’.  Too much choice makes a cesspool out of small talk.  I hate myself sometimes for knowing ‘how many grams is that Guy’s jacket’ and try now more vigorously to protect myself from that game and its participants.

I sent my camera home.  It was too heavy and I couldn’t see my feet.  My tired body would stumble multiple times a day because my chest pack interrupted the visual continuity of foot placement and it became a risk to finishing safely.  I sent my GPS north to Kennedy Meadows since I have cell service mostly every other day.  I no longer have pants.  My pack is miraculously 5 pounds lighter (which is huge after 28 miles a day #notsohumblebrag), but slightly less… lighter because Kathryn’s pack also became lighter.  And it didn’t cost me a cent!  I’m likely safer now than before.  I carry and use heavier safety items when necessary, but the USPS is so good there is no need to over carry in the desert.

Of course you get to a point where the convenience of certain items outweighs their… … weight.  For example, my headphones weigh a lot (25g), but sound so much better than anything lightweight (8g).   My shoes are super heavy, but they fit my awkward feet (and FFS WTF Altra – now I don’t even fit your newly stupidly narrow stupid size 14 stupid Lone Peaks).

My gear spreadsheet was updated a while ago but it’s a all just a bit boring.  When you lay down your head at night, the less you have to think about packing up and carrying in the morning, the better.

*Bonus: I say ‘likely continued’ above – because I often find myself reflecting on the differences in our approach this year – but cannot say for sure that I haven’t previously done because the greater part of my memory was outsourced to Kathryn when we got married.

One thought on “Gear redux – while watching ‘Chamber of Secrets’”